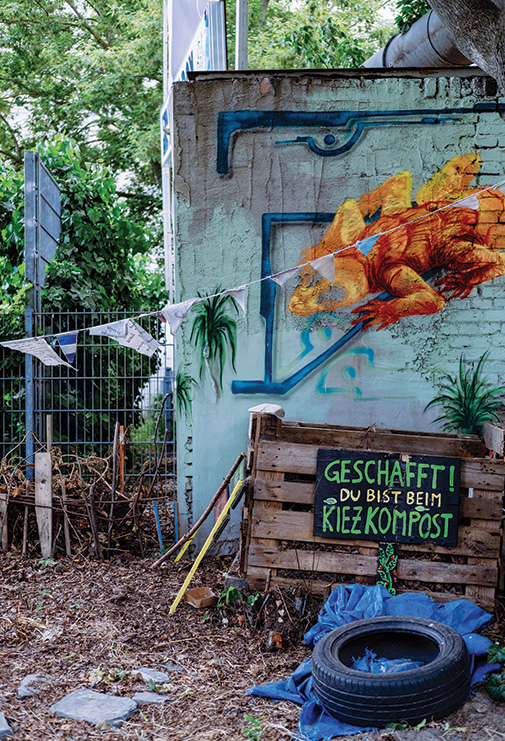 The early spring sun was bright and warm, but I draped a heavy top around my shoulders for later. Passage through the bushes and undergrowth was not as easy as she had asserted. I had worked up a sweat and my face had encountered some nettles. The rash tightened my skin and itched like hell. Still, the German graffiti, something about compost, and the squat brick shed with the orange-brown lizard, all confirmed that I had arrived at the right place. I took a sip of water, the only sustenance I was permitted to bring. I investigated the lizard. It appeared to have been modelled from croissants and it was eyeless.

A greenfinch and a chaffinch squabbled on the section of pipe that ran over the top of the shed, a pipe that once carried something from somewhere to somewhere else. I walked to the end of the shed. There was a covered entrance, then a heavy steel door, bolted and padlocked. It reminded me of an old air raid shelter near my school playing fields. There was a short tunnel which led to a similar door. We gathered in the tunnel for an illicit cigarette during break and lunch. As if by agreement, the schoolmasters never patrolled the area. I had stopped smoking years ago, but a cigarette then would have been particularly welcome.

The tyre was the only seat. It was comfortable for short periods of time, but I had to get up occasionally and stretch my legs. As I sat, stood, walked, and sat again, the sun moved across the sky and dipped below the horizon. The sky changed from blue to pink to purple and then light black. The birds stopped singing. The heat diminished with the sun and I slipped on my heavy top. A handful of stars appeared, a pale crescent moon rose, a fox barked.

It had been dark for some time. I was feeling cold and began to feel rather foolish. Clearly, she had become irritated by my constant questions about matters beyond my understanding. She had got my hopes up and sent me on a fool’s errand. No one was coming. I couldn’t find my way back in the dark. I had to wait until morning. I sat leaning forward on the tyre, chin resting on my fists, brooding about how I could get my revenge. Then I heard voices, singing, chanting. I looked up and saw light flickering amongst the bushes. Flaming torches and chanting moving towards me.

The faint buzzing behind caused me to turn towards the hut. The croissant lizard was pulsating. It pulled itself off the wall, turned its eyeless, all-seeing face towards me. I was compelled to kneel. The chanting grew louder, and I felt a hand on either shoulder.

My initiation had begun.