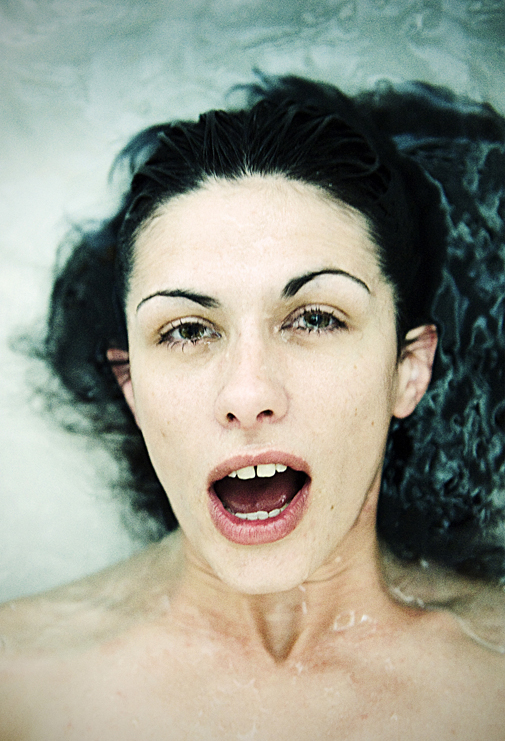 Not quite a gasp: a poster.

The film was made in a small country. They say that over there, filmmakers living on the breadline are producing a weird, new wave of cinema; although that country hardly ever produced a first wave. No high tides, now low tides, just water, the sea with its moderate storms. Nothing like the ocean, which produces real, big waves of cinema. Sometimes, a remarkable sailor left his (or her, like some like to add) mark, but not much more than that. And as with other new waves, we start with claustrophobic violence in the intimate space, where fathers are still unacceptably patriarchal, where sexual induction is always a nightmare, and a girl's smile is never simple.

Filters have been applied, and colours are intrusive. Paper-thin-skin-translucence. Weird, yes. Even more so, as the new edgy, neurotic corporeal absurdism is very remote from the country's long tradition in the arts. The palette has a mimetic, exaggerated range of touches to it. References are blurred: where are we, who exactly, when, what. Is it allegory? Is it just raw? A confession or a trial? Questions are not only unanswered, we're not even sure why they're being asked. There may be one exception: does the audience belong? The essence of this novel cinematographic experiment lies in the perpetration of a hellish, not so common, yet truly contemporary experience. All is done without shedding any light onto something new, or, better said, failing to reveal something that was waiting to be revealed. Rather, it creates more obscurity, be it with half-lit awkward sex scenes, or with invented languages and choreographies shot under a neon-silver, overwhelming, tricky light.

Not quite a gasp: a poster.

And so, I think, as I stand, looking at this new poster, outside my favourite cinema: another girl, with an uncertain look about her. One thing is right: the water. The water means a lot. Closeness to it is paramount. The water, the water... I think I know! Some choke in it, others come out of it to breath into life. Creatures of mythical beauty, with grand origins and spectacular falls.

I ask Pavlos, standing by my side: ‘Is she a swimmer? Do you think? Whose lungs have been trained to last, to pulsate life in and out of her with clockwork precision. Do you think she's got something to say? Or is it going to be like the other ones: mouth half-open, a peasant gap between her front teeth, but not much for us in the dark room. Pavlo?’

He is looking at me; such patience in his eyes: ‘We have to go in if you want to find out. She's not coming out of that poster to talk to you.’

And yet, she has. Moist. Breathing freedom, loneliness and courage. That's the only story she'll ever tell. Besides, we can't afford to go to the cinema.