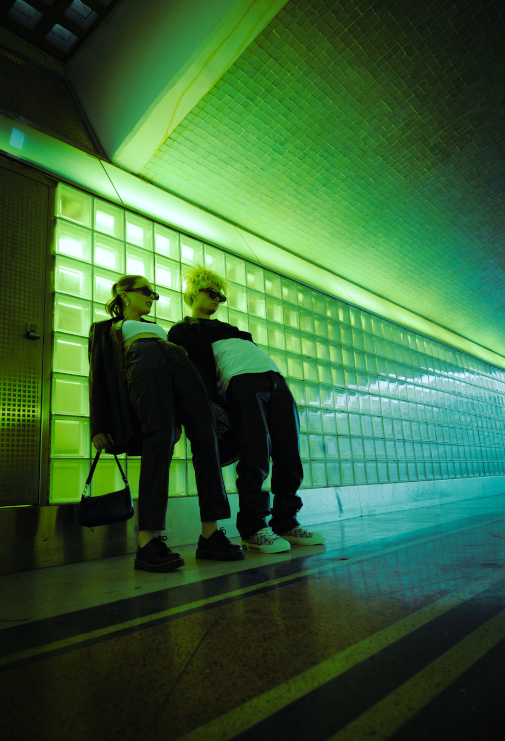 “Damn you, Jacob,” I say, as the train recedes into the circular tunnel. “You ruin it if you don’t hold the position the whole time it's here.”
“This is just so stupid, Nina. And my back felt like I was leaning against a porcupine.” His white T-shirt glows an intense green in the neon station lighting and I regret spending time with him. My precious time. The doctor guessed six months, only three of them good ones. I'm collecting wild, primary color adventures to replay during the last awful months, not the beige and gray memories I've collected as a straight-A student, the teacher’s pet, always a good little girl.
I flip my dark glasses back over my eyes, intent on experiencing this moment of weirdness, even if he’s being a loser. As I hear the rumble of the northbound train approaching, I lean my shoulders against the wall again and thrust my hips out, shut my eyes and despite my normal stoicism, begin moaning and gasping. The sounds erupt from my throat, fueled by my ever-present fear of not living hard enough, as I count down my days.
I hear a growl next to me and I open my eyes. I grin, happier than I should be at seeing Jacob next to me, hips thrust up even higher than mine. The train on the other side of the station squeals to a stop. Behind the cover of my dark glasses, I watch people staring at us, a few even pointing. This is at least a lavender memory, if not a royal blue one.
“I love you,” he says, as the train accelerates away and we both push back to standing. “I'm sorry if I can't handle this sometimes…sometimes I just want to scream and yell at God. I love you. I miss you so much already.”
I can't see his eyes behind his shades, but a green-lit tear rolls down his cheek and I trace it with my fingertip.