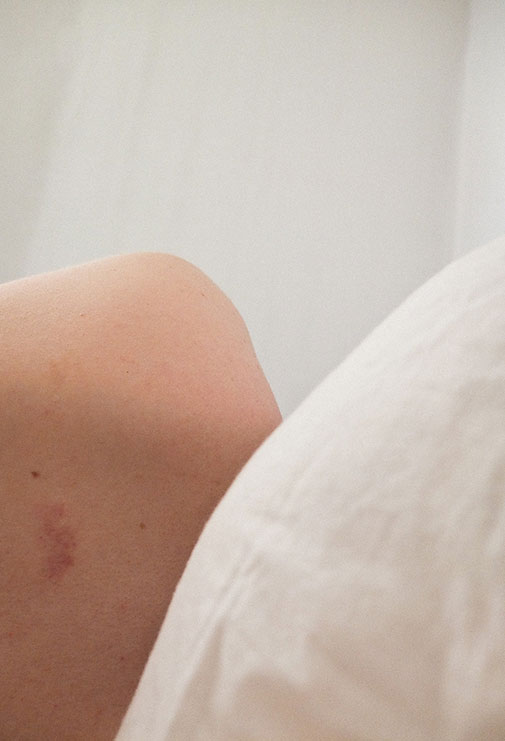 David Rein
He only realised the bruise was there after the first phase of preparation was complete. It sat diagonally in from the shoulder and he couldn’t quite tell what it was from. While he didn’t like imperfections he wasn’t a complete obsessive. Small moles and so forth were fine. However a bruise was something else. It was evidence of an external agency and so unacceptable. He stared at it for thirty seconds or so, wasting precious time.

Finally his genius showed him the way forward. He could not ignore the bruise and covering it would defy the point, so he would make it the focal point. This resolved, he went to the bathroom, retrieved the blue basin, hot water and towels, and began the second phase of preparation.

As always he wanted to immediately cleanse the area he would be photographing. However he dutifully forced himself to first clean the mess, then the legs, torso and arms, before slowly removing any makeup and finally washing the hair. At one point a bead of sweat broke his brow. He stepped back and wiped it away with a handkerchief.

He would use a sheet as background and the room’s lamp as a light source. Everything should be white in the picture apart from the skin and the bruise. He would arrange the subject on the bed so the line of light and shadow cast by the lamp would fall exactly on the bruise. The level of his artistry still shocked him.

The composition decided, he unpacked the camera and tripod. Next he painstakingly washed himself and changed into a soft white shirt and Armani jeans. Time was running short.

Positioning the subject proved harder than he expected, the requirement for absolute intersection proving exceedingly difficult. However, after precious minutes, the task was managed exactly. The subject’s torso rested on two pillows, the left arm stretched away and both legs curled up. He set up the camera. He always used a prime lens for clarity and he had to come in quite close to show the bruise clearly. He focused manually then stepped away, using a remote shutter controller to avoid the slightest camera wobble. Nervous, he checked the camera again. He only ever took one picture. That was the point. Perfect. He stepped away, closed his eyes, sighed softly and pressed the button on the remote. The sound of the mirror flicking up and down was loud in the otherwise silent room.

He opened his eyes and slid the remote into his pocket. As usual a wave of fatigue threatened him. He needed to get rid of the body but had a little time before taking on that unpleasant chore. He made a cup of tea and sat down on the bed. The cooling body rolled slightly, resting against him. As he moved to push it away the forgotten remote fired the camera once more, ruining the whole exercise.