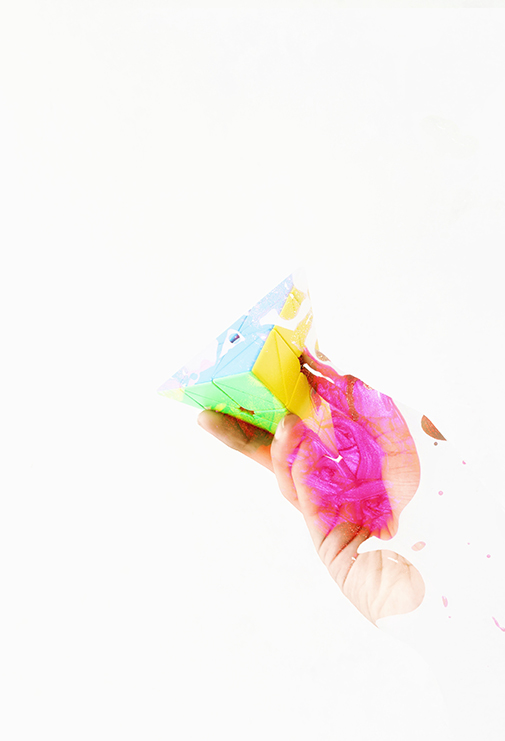 A Timestamp on Transfiguration

She was leaning in to wield what she held, with its faces of yellow, blue, and green. She could only use one hand because the other was erased in a deep sticky liquid that looked like Elmer’s glue but had the pull of something greater than gravity. She needed to act quickly, for already her free hand was starting to give way to the same whisperings of this particular brand of white supremacy.

The object, which seemed an attempt to triangulate the square mediocrity of a traditional Rubik’s Cube, kept digging into her hand. It had a tenacity to thwart her efforts, and she knew she must gather its wild energy with a force unsuspecting to it, an intensity which she knew that to work, must also be a shock to her own system. So far her own pink pooled in her hand, exposing the strain of her muscles in their exertion to bind and transcend that which sought to destroy her.

She would first try to penetrate yellow, and she knew she would succeed upon its change to orange. She could feel the yellow rays beating down upon her, gradually baking her pale freckled skin. Once conquered, she knew that the full-bodied warmth of orange would radiate outward from her being, and with its darker color, overpower the yellow rays. She would, she must; warm this cold world.

The blue was creating an oppressive and unrelenting push on her being, thick with a narrative that kept telling her to collapse and unravel into concavity. She knew that when she overpowered this, it would turn into a purple with an insight so strong that it could pierce through the low barometric pressure of the cloud layer, and that it would rain – hard. With the collective power of her pink and its blue, she would nourish the ground with the staccato impact of the justice that the earth was overdue.

And finally with the green, she could feel the wrapping of vines around her

A Timestamp on Transfiguration

throat that threatened to grow around her and consume her with their own agenda, their individualistic notions of enlightenment, which were undoubtably a contradiction. Once she could redirect this egoic aggression and push its inertia back on itself, she knew that a sweeping influx of grey wind would be hers. The soft and mutable grey that could move through all worlds, that transcended all black and white markers, whether in contrast or conversation.